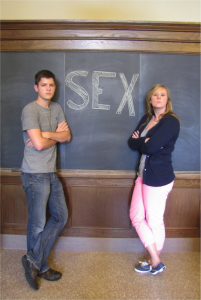 In early 2012, two Honors College students, Brianna Rader and Jacob Clark, recognized a need for a forum in which UT students could talk about sexual health and practices. They began putting together a program for what would become UT’s first annual “Sex Week” — unintentionally provoking one of the UT’s fiercest debates over who would ultimately control the content of educational programming at the University. 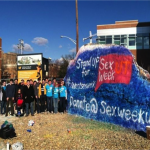 The controversy began in March 2012, in the weeks leading up to the first Sex Week, with an inflammatory article in Campus Reform, a conservative watchdog publication whose stated mission is to expose “the radical left’s aggressive and often violent attempts to suppress free speech and conservative thought at America’s colleges and universities.” The article was then picked up by a Fox News columnist who published another article misrepresenting both the content and mission of the event. (That article is no longer available online, but its errors and omissions in are discussed here and in the interviews below). The Tennessee General Assemble subsequently pressured campus administration to pull campus academic funding from Sex Week. Undeterred, the students held a fundraiser and raised the money in less than two days.

In the years since, the students who organize Sex Week have faced a series of challenges in order to continue putting on this event. They have endured a hostile press, legislative censure, and continuing threats to academic and extracurricular activity funding. Nevertheless, Sex Week continues to be one of the most popular student-sponsored events on campus every year. It remains one of the only week-long educational programs organized and implemented both by and for students.

The story of Sex Week has been chronicled by numerous outside observers over the years, and has often been deliberately or unintentionally misrepresented. In the interviews below, listeners can hear the story from the participants themselves.

Brianna Rader and Jacob Clark, student co-founders of SEAT, discuss the origins of Sex Week and the difficulties that SEAT faced in its early years. (11/23/16)

Summer Awad, an early member and former co-chair of the SEAT executive board, discusses the controversies that surrounded Sex Week during her time at the University. (11/3/16)

Colleen Ryan, former co-chair of SEAT executive board, talks about how the students in SEAT have handled hostility from the Tennessee General Assembly, and about the good that “Sex Week” continues to do. (10/21/16)

Lynn Sacco, former faculty adviser to SEAT, talks about her perspective on Sex Week’s importance, and offers some insights on the place of sexuality in the era of “culture wars.” (11/16/16)

Joan Heminway, current faculty adviser to SEAT, discusses the early years of Sex Week and the legal issues at stake in this battle over university autonomy. (11/29/16)

Terri Lee, Dean of the College of Arts and Sciences, talks about the educational value Sex Week, its support from the University community, and the legal issues involved in its funding. She also talks briefly about how Sex Week became involved in the controversy over the Office of Diversity and Inclusion. (11/15/16)

Jacob Clark and Brianna Rader on the Bill O’Reilly Show

College of Arts and Sciences
Department of History

The flagship campus of the University of Tennessee System and partner in the Tennessee Transfer Pathway.